The Search For A Concealed Impact Crater

Professor Dr. Donald Stierman and student Eric Armstrong from the University of Toledo, Ohio (UT) recently used the MOHO Tromino passive seismic system from Exploration Instruments (EXI) to try to detect the bottom of a suspected impact crater located in Seneca County, Ohio. It is believed the crater is concealed under 10 meters of till and the survey area is covered with row crops spring to autumn.

The MOHO Tromino is a small broadband, three component seismograph that utilizes the Horizontal to Vertical Spectral Ratio (HVSR) method to generate a shear wave velocity model of the subsurface. UT used the Tromino to measure the passive ambient seismic noise using its three component seismograph (N-S, E-W, and Vertical components) outside and inside the potential crater.  Employing MOHO’s HSVR processing software, Grilla, the measured background ambient noise was used to generate Impedance Amplitude Reponses verse Frequency plots.  The higher the amplitude the larger the contrast between layers and the lower the frequency the deeper the contrasting layer.  Data from outside the potential impact crater in Figure 1 shows a strong impedance contrast response observed at a frequency of approximately 10 hz.  A depth verse shear wave velocity plot was modeled based on the H/V response in Figure 2 using Grilla which shows data consistent with the soil / bedrock interface of 10 meters from well logs and other geophysical data from outside the potential crater.

The record from inside the suspected crater area, shown in Figure 3, indicates a more gradual impedance contrast - consistent with the fractured bedrock expected in the crater. 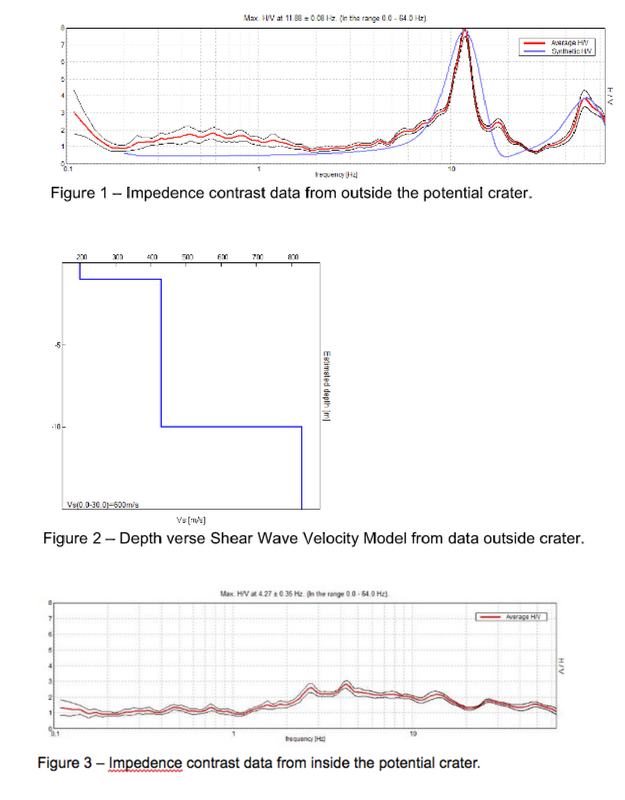 UT is still performing final processing and interpretation of the Tromino data and EXI will share the final results when UT’s analysis is complete.  The most recent formal report by UT is a GSA poster you can view via a link from the abstract https://gsa.confex.com/gsa/2016NC/webprogram/Paper275334.html.